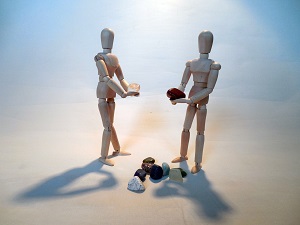 When a couple divorces, each party gets to keep any separate property they have, and all marital property is subject to equitable distribution. Commingled property presents a challenge. It’s hard to decipher which assets or funds are separate and which are marital when they’ve been mixed together.

All assets must be classified as either separate or marital during a divorce. The only way to classify commingled property is to trace the funds back to their source. This is very important if you want to avoid your spouse getting a portion of your separate funds. If you have detailed records, such as bank statements, copies of inheritance checks, etc., that traces the money back to you, those assets should remain separate property and will be yours to keep.

Examples of Commingling of Property

Commingling of assets is a natural part of marriage. When a couple weds, they often combine bank accounts and do not worry about who owns what because “the money is ours.” It is only when divorce is imminent that commingling becomes as issue.

Below are a couple of common examples of ways couples commingle assets.

Commingling Assets in Divorce: When the Lines Are Too Blurry

Commingling assets doesn’t necessarily have an impact on divorce. As long as you can prove which property is separate, there will be no issue. But often, it’s simply too difficult to trace the money back to separate property. If you deposit separate funds in a joint account and use some to pay for marital expenses, the question becomes “Whose money was withdrawn?” This can be difficult if not impossible to answer.

Mixing of assets in marriage is akin to scrambled eggs. Once the eggs are scrambled, there’s no unscrambling back to their original state. When this occurs, the assets in question will be considered marital property and the courts will divide a fair portion to each spouse.

In marriage, it’s better to keep separate property separate – but hindsight is 20/20. Without a solid paper trail, you might have to bite the bullet and divvy up commingled assets.

It’s highly advisable to work with an attorney during a divorce, particularly for challenges like commingling assets in divorce. An attorney can assess your property, help you collect evidence to show which property is yours, and then come up with creative solutions for equitable distribution. Most important, a good divorce attorney can make sure that your interests are protected and negotiate a favorable outcome.

For an attorney that can assist you with all aspects of divorce and property division in Gwinnett County, call the Ward Law Firm today at 770-383-1973 and schedule a REAL Case Analysis or fill out our online contact form.